Welcome to Square Enix Wiki! Be sure to check out our To-Do List to see what work we need done!

From Square Enix Wiki, the Fan-wiki for all things Square Enix
Jump to navigationJump to search

Kingdom Hearts II is an action role-playing game developed by Square Enix in collaboration with Disney Interactive. It is the third game in the Kingdom Hearts series, following Kingdom Hearts Chain of Memories. The game again follows Sora, Donald, and Goofy as they search for Riku and King Mickey.

Picking up at the end of Kingdom Hearts Chain of Memories and Kingdom Hearts 358/2 Days, Sora, Donald, and Goofy have been sleeping for a year while they regain their memories. In the meantime, Roxas has been living in Twilight Town, trying to understand the strange dreams he's been having of Sora, who he does not know, and Sora's first adventure. Roxas encounters various strange anomalies, including a strange enemy that continues to attack him. He soon comes in contact with Axel and Naminé, who each seem to know him. After six days, Roxas learns that he is actually connected to Sora and was friends with Axel before he was defeated and brought into Twilight Town. Roxas finally comes across the mysterious voice that had been leading him, an enigmatic man known solely as DiZ, and decides to return to Sora, effectively disappearing.

Sora, Donald, and Goofy awaken in Twilight Town, not remembering how they got to Twilight Town or anything from the previous year. After being saved from some new enemies by King Mickey, the trio soon learn from Master Yen Sid of the new enemies, called Nobodies, and the mysterious Organization XIII that's composed of thirteen powerful Nobodies. They also run into Pete, who is recruiting an army of Heartless for Maleficent.

Sora, Donald, and Goofy, with help from Mickey, finally come across a link to the Organization's world through Twilight Town, where they find the alternate Twilight Town where Roxas had been kept by DiZ. With a tip from a hooded figure, they figure out the password to the Simulated Twilight Town and make their way into the secret link into The World That Never Was. On there way, however, the trio is ambushed by Nobodies, but are helped by Axel, who puts his whole existence into defeating the Nobodies, confessing as he fades away that he had kidnapped Kairi in hopes of finding Roxas, and helping them reach The World That Never Was. Once there, Sora runs into a hooded person, who battles him, revealing that it's Roxas. He disappears after that battle.

Sora, Donald, Goofy, and Mickey finally arrive at the Organization's stronghold, The Castle That Never Was. There, they begin to run into several members of the Organization, defeating them, and finally reuniting with both Riku and Kairi. Mickey goes off ahead and finds Ansem the Wise, who attempts to convert Kingdom Hearts into data using a special device, but which ultimately explodes, seemingly killing Ansem and releasing Riku from the hold of the darkness that had transformed his appearance into Ansem, Seeker of Darkness. Sora also learns that Roxas is his Nobody, and learns of Naminé, who is Kairi's Nobody. They finally face off against Xemnas, the last remaining member of the Organization. Sora and Riku unite to defeat him, and his new Kingdom Hearts is destroyed. Sora and the others are returned to their homeworld of Destiny Islands, where Kairi, Mickey, Donald, and Goofy are waiting.

Sometime later, Sora, Riku, and Kairi receive a letter from King Mickey. They proceed to read the letter, but the contents are left unrevealed.

Kingdom Hearts II follows the same free-roam, hack-and-slash combat gameplay style featured in the first Kingdom Hearts title. Sora is once again the main playable character, though the game features certain segments and events in the game where Roxas, Riku, and King Mickey can be played. Sora is joined by a party of Donald and Goofy, who are not controllable, but their AI can be customized in the game's menu. Depending on the world they're visiting, Donald or Goofy can be switched out with a world-specific party member.

Like Kingdom Hearts, each character gains experience points on an experience point system which enhances and increases the character's abilities as they defeat enemies. At the beginning of the game, a segment of Dive to the Heart allows for the player to somewhat customize the way in which Roxas/Sora develops. Like in the first game, this segment allows the player to choose an attribute in which to excel and one in which to lack in, the attributes being strength, defense, and magic.

The game progresses as certain tasks are completed, allowing for a linear progression from one story event to the next. Several additional quests and tasks are available that do not progress the story, but provide additional bonuses to the characters or tease upcoming events in the series.

Kingdom Hearts II features a hack-and-slash system, in which battles with enemies are in real-time and require the player to press the controller buttons to activate or begin attacks. The "Commands" menu, found on the lower left corner of the screen, provides options to "Attack" with the Keyblade, use several kinds of "Magic", such as Fire, Blizzard, or Thunder, or use recovery "Items". Shortcuts can be assigned to quickly execute magic attacks without scrolling through the Command menu. Kingdom Hearts II also features new commands that allow Sora to summon characters, switch into one of the powerful Drive forms, switch party members, and begin party Limit attacks. Movement is controlled with the left analog stick, while the Command menu is controlled with the right analog stick and directional buttons, allowing for the player to move around and scroll through the menu at the same time.

Kingdom Hearts II also features the return of the Gummi Ship missions as the main mode of unlocking the next world in the story. Unlike in the Kingdom Hearts, the missions are almost entirely optional, requiring the player to play through each mission only once to unlock the world the first time. However, completing each mission will unlock three additional challenge missions. The missions are now more fast-paced and have a rail-like progression, with limited movement as the Gummi Ship automatically moves forward. 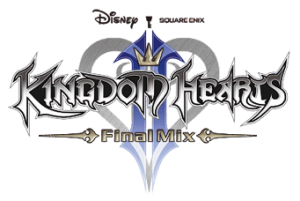 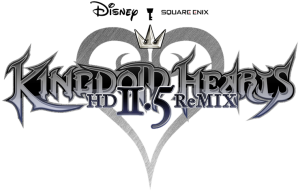